Yesterday I woke at dawn, feeling the bottle of wine I’d stopped drinking only 4 or 5 hours before.  I couldn’t stand lying in bed so I went to Michigan Lake, with no plan but to see the water.

At the early hour many people still flanked the beaches where the low sun glittered on the water.  I went out to the pier north of Foster Beach and sat and looked at the rocks and the gulls and thought about the pier that I was on the day before up in Rogers Park.

It was painting day at Pratt Street Beach.  That’s the day when everyone in the neighborhood comes out to paint a long bench along the beach.  There was band playing on the grass near the water and  kids played together in the sand and fished off the pier.  It was a blissful afternoon, a rare moment in time — fleeting in its magnificence — like days I spent abroad, when I knew the time and the person and the place would only last until the clock ran out, until the bus left.

I used to compare these broken-heart feelings to the loneliness that comes when traveling abroad alone.  This morning I woke up thinking I was back underneath a mosquito net, far away and alone.  In the tight grasp of imminent, irreversible change.

I was asked this morning in the bathroom if it was my allergies again.  I said it was.  It’s lucky I don’t have too much work today.  It might be irresponsible to even be here, since I can barely speak.

It is for the best.  It is sensible.  If it didn’t happen it would have ended with frustration, bitterness.  Rather, it ended with a beautiful day at the lake and a *maybe in the future.

It is tragic though.

It was better when it was just the mosquito net. 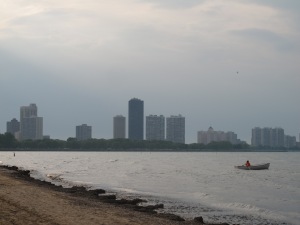